Another week, another Twitter hack, this time it’s the turn of Burger King to fall victim.  Hackers changed the profile picture to the Golden Arches and tweeted a load of nonsense.  Burger King have responded by closing the account and apologising on the Facebook page.  And no, McDonald’s have not admitted responsibility.

I can’t help but wonder whether this sort of thing can actually have Marketing Managers giggling like school children and rubbing their hands in delight.  I mean, it’s not as though they got any publicity from the horsemeat scandal, they were clean; they tried to be public about it, but you can’t chase after a company wielding your burning touches when they’ve done nothing wrong, so that basically got ignored.  Then, bang, someone trying to cause trouble, actually does nothing more than get them headline news about how Burger King have still failed to do something wrong.  Macdonald’s then got to publicly say how sorry they felt for Burger King, and the corporate giants actually come out looking rather genial and set upon.  Whoopsie, hacker, epic fail (as they say on the Internet).

This then got me thinking about positive ways of doing this sort of thing.  And step forward Waterstone’s Oxford Street and Foyles.  Anyone following these two will know about their hilarious banter and playground rivalry.  And you know what?  It makes me want to go to both shops.

The point I’m making is, business using social and competing are often missing a trick.  Collaborate on something witty, something meaningful, something that shows you are truly social and not just out for yourselves and both businesses benefit far more than cynical competition.  Plus, it’s a lot more fun.

Here’s the latest example of the battle of the bookshops: 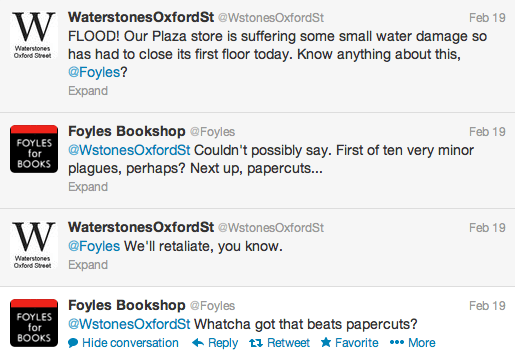